Stop and Watch – Coaching for behaviour

Attending the Melbourne Lean Coffee meet up a couple of weeks ago I picked up a little coaching gem from an attendee that I’m keen to try out, despite it hinging on a sporting metaphor for work, which I’m usually strongly opposed to – teams working together is rarely akin to a game of two halves.

The story in question came from Lean Coffee attendee  Daniel Ploeg, who was amongst a whole bunch of parents being coached on how to coach a junior soccer team by observing an expert coach and the example goes like this:

The kids were milling about playing and the expert coach noticed one kid running into ‘open space’ this is something you apparently want to encourage in your soccer players as it creates opportunities to collect passes.

Daniel’s instinct was to encourage the good tactics by shouting out ‘Well done Tommy!’ to the player while play continued however the expert coach did something else. He stopped the whole practice game, and explained to all the players what Tommy was doing and why it was good, he then restarted the game telling the players to watch how Tommy was running into open space.

This created more ‘level up’ opportunities in the following ways: 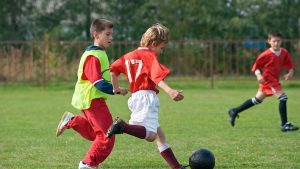 – When the game re-started all players started to running into ‘open space’ themselves; the entire team’s level up opportunity was increased in this moment

Applying this model to the world of work as a coach of delivery teams really got me thinking. How could we implement that ‘stop and watch’ behaviour when coaching teams of people and how could we use this approach to encourage the modelling of positive behaviours at work?

I can think of a few scenarios:

– At your daily stand up you could mention a behavior that you saw the previous day, and ask the person to talk or show the team right after the stand up.

– In any of the team sessions you run you can be looking out for contributions that are desired behaviour, stop the action to acknowledge the contribution or even ask for the contribution be repeated for the group so everyone picks up that behaviour

–  If you’re a person that likes to mix approaches to your Retrospectives, you could ask the team to identify good behaviours (coding, planning approaches, work practices or collaborating) that they have seen during the sprint and spotlight those individuals asking them to elaborate on that behaviour for the team.

– And what about stopping everyone in the middle of their day to spotlight something great?  “Hey! Great thing happening over here everyone! Come and check out what your team member is doing!” Perhaps that would be a bit disruptive, but maybe not? I can imagine a lot of teams I work with mentioning  this kind of thing in a Slack channel as a somewhat quieter alternative.

Do we shy away from stopping the action in order to focus and amplify great behaviours at work? How might that be preventing the team from building on desired behaviours? Will that stop a team dare to achieve aspirational goals? Are you brave enough to stop the flow of output in order to create a learning opportunity?

As a coach and a leader it can feel counter intuitive to single out individuals, I often hold back not wanting to create competition that I feel can be detrimental to team gel, but the expert soccer coach example illustrated more positive ways to achieve this and level up the whole team in the same moment.

Since then I have set my radar to observing positive behaviours in team settings, why not try it, and go one step further; Stop and Watch those behaviours with your team?

My final take-away from the session was how ‘levelled up’ I felt attending the Melbourne Lean Coffee and how I increased my knowledge both by observing and listening, and also by contributing my ideas, that were formed into new ideas, and built upon on the spot. I highly recommend you add these kind of sessions to your own curriculum of learning.